#### Why It May Be Time To Rethink Your Skepticism

I still remember the first time I studied ads in school — it helped that it was eighth grade english. 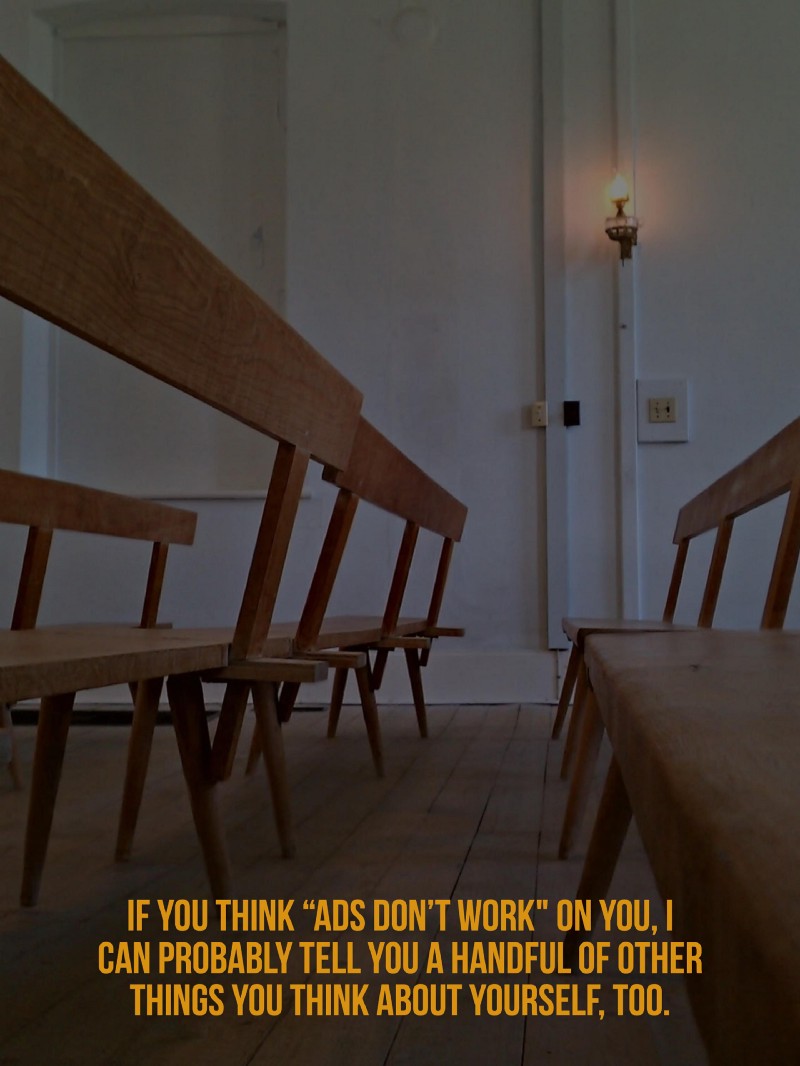 If I had known then what I now know, I’d have ruined that class by suggesting that the only thing you’d get out of paying attention to the call to action is a lifetime of disappointment and sucker’s bets.

The truth is, if you think “ads don’t work on you,” I can probably tell you a handful of other things you think about yourself too. You likely prefer to dress in earth tones, you aren’t likely to be reached in a radio audience (unless it’s a campus station or the current,) you strongly identify with statements like “I go my own way,” or “Never Settle For Anyone Who Makes You Feel Like an Option…” I could keep going.

You wouldn’t ever identify with all of the traits I might list, but you’d identify with enough, you might start to wonder how original your rebellion really is.

That’s the trouble with paying attention to the call to action, it’s often the least insightful part of any advertisement. 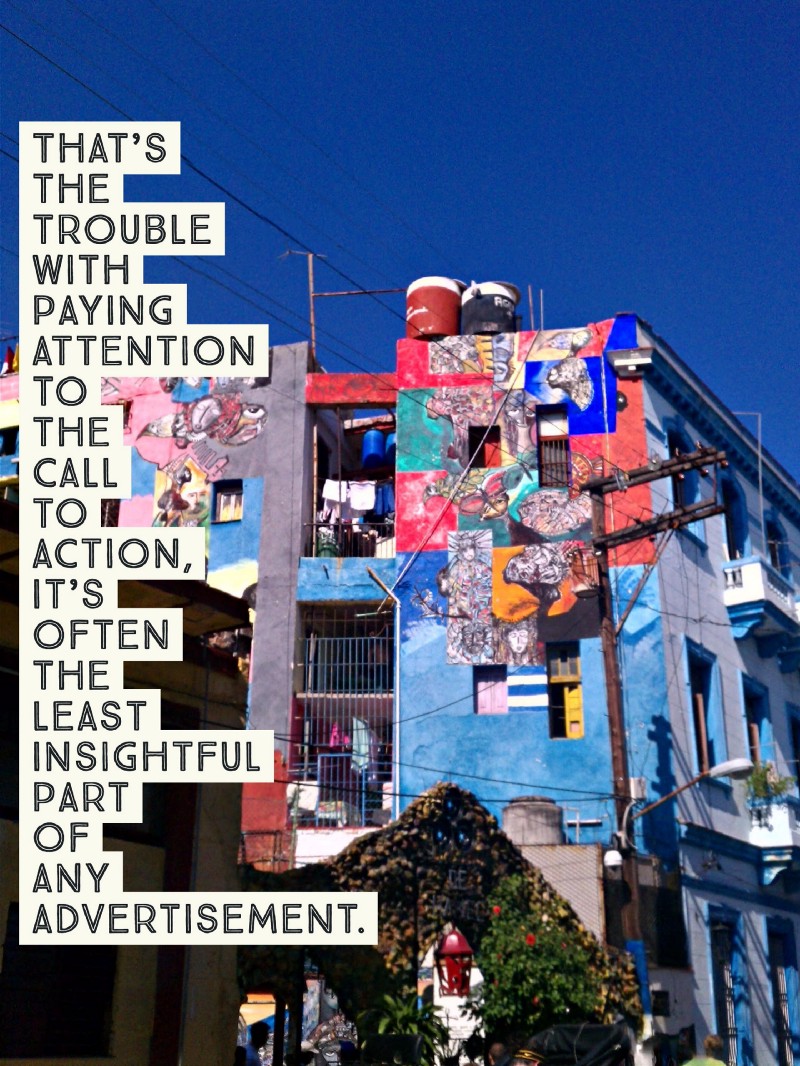 This is the case for two reasons.

The first is the simplest, if marketers like me had our way, we would never ever run another ad “selling the product,” ever again.

I have a pretty unique diet, and I’ve got relationships with brands that only my “unique diet friends” know about. You can see this happen all over the place if you have a few friends who are all into different things. Have a friend that’s “really into guitars?” they’ll likely have very identifiable divergences from the “average consumer” pattern.

There’s nothing wrong with this, of course. You can’t sell a product people don’t understand, but carried to an extreme the impulse to make this kind of ad is also responsible for some of the worst examples of advertising.

The truth is, we make “ads” for a wide variety of reasons, and some of the best reasons to do it have nothing to do with convincing you to buy something…at least not right away.

So that’s the first problem, but to be honest, the second is a bit more nuanced.

To be honest, that’s likely the fault of how rapidly that definition has changed.

These days, I most frequently encounter “ad” as a description of the smallest discrete purchasable quantity of inventory.

If you were looking at the world as being made up of only this sort of ad product, only looking at calls to action might make sense.

Some platforms allow you to bid on impressions based on audiences of users. What that means is that while you may only make one “ad,” that “ad” is in reality being shown in a number of places in a number of different ways.

Many times the ability to create ads in this manner proves to be a valuable feature of the publishing platforms that offer the capability. 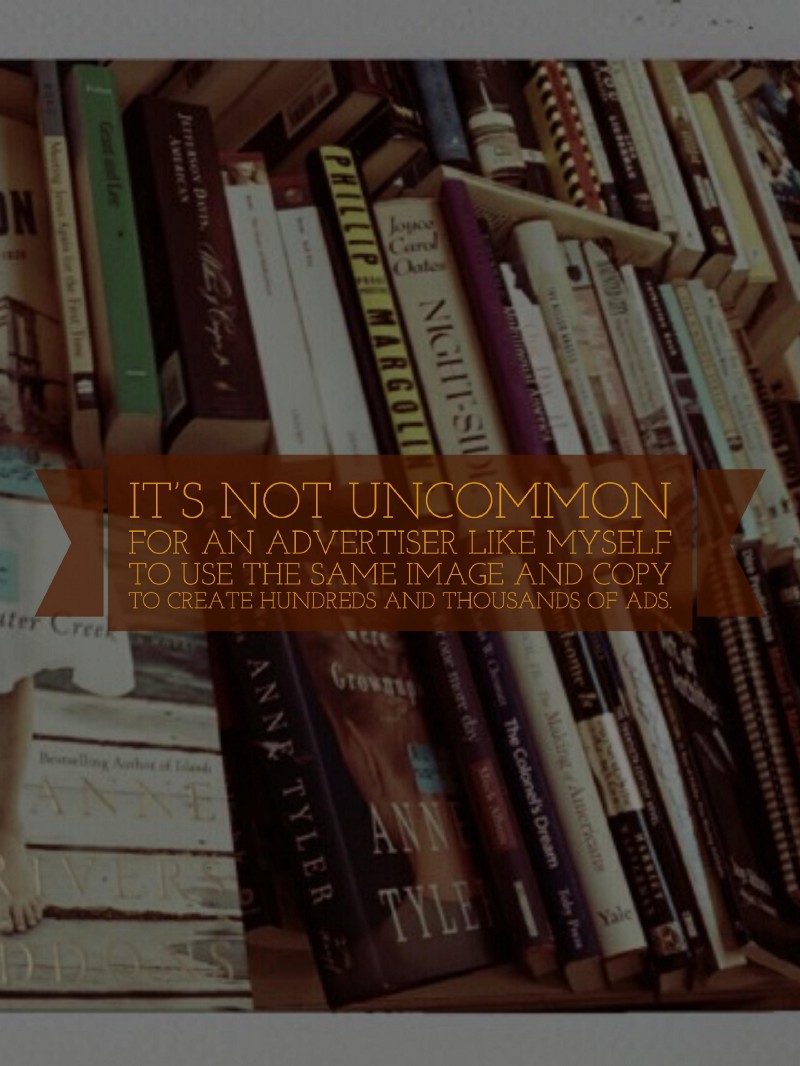 That means that on a platform like Facebook it’s not uncommon for an advertiser like myself to use the same image and copy to create hundreds and thousands of ads. Each ad is part of a search for just the right balance of customers.

When we find that balance on an audience centric platform, we can use the insights we generate to plan bigger and better marketing.

This is one way large brands can identify exactly which celebrity, figure or performer they ought to approach to promote a product. It’s not the only way, and it doesn’t just work for big businesses.

I started this article by explaining that I didn’t think that class was very good because it must have been written by advertisers. The truth is, that if you only look at the clicks, you’ll miss all of this nuance that I’ve pointed out. If you wanted to start to notice modern ads in the same way, it might be better to ask “why am I seeing this, here, now?” 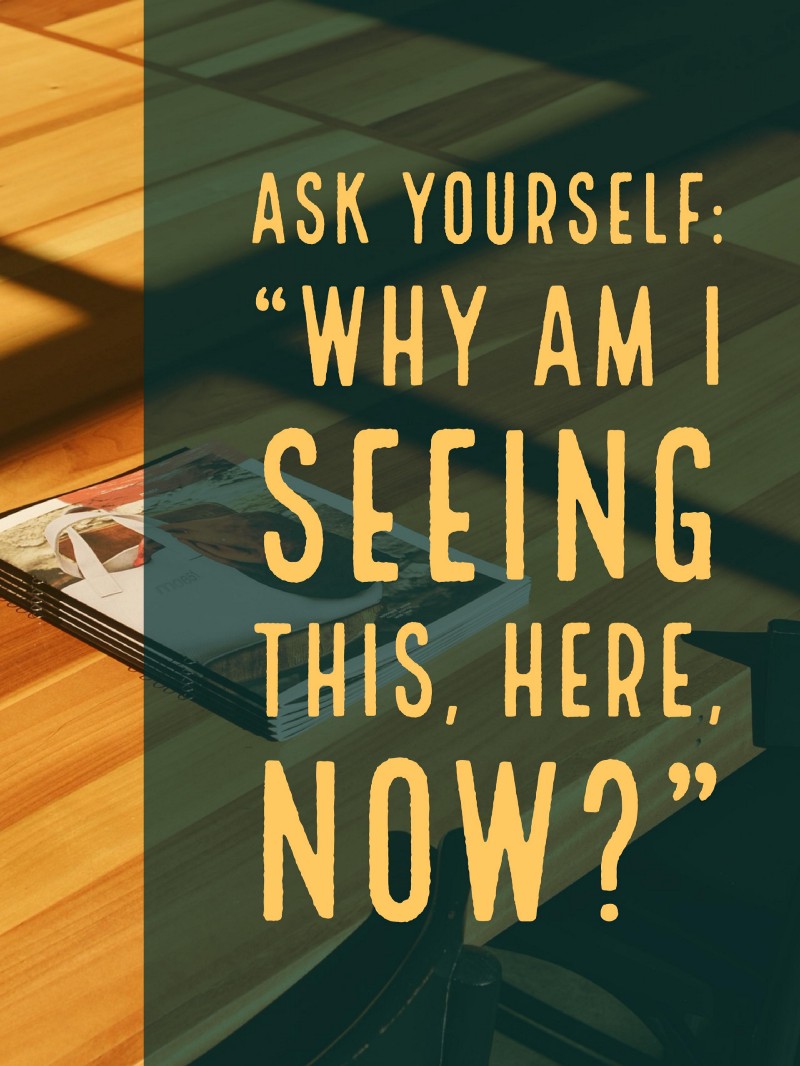 I added that storm of commas on purpose.

I think when you look at an ad, you should ask yourself three questions.

First, try to figure out what it is you’re seeing. It isn’t often the case, but from time to time motivations aren’t as clear as they appear to be. An article might be paid for by a company. An interview could be conducted by a partial host. You won’t always be able to see between the lines, but with a little creative Googling, you can figure out who is behind most major advertisements.

The second question you need to ask yourself is why is this ad placed where it is.

You may find that you’re seeing a banner ad on multiple websites. If you only look at “calls to action,” you might be inclined to think an ad is following you — and sometimes it is. Other times however, an ad can be running to all of the media properties across a family of brands. Unless you know who owns the property you’re looking at, it’s hard to know what’s going on.

The third and final question you need to ask yourself to understand a modern ad is why am I seeing this ad right now.

It might still make sense to think about the “call to action,” but if you can try and remember those three questions, I think you’ll keep yourself from falling prey to most of our dirty tricks.