You Can Learn A Lot From Rage, Really. So there it was.

I had woken up because one of our clients had a social media property that had offended someone. It wasn’t anything dramatic, a misspelling had suggested an offensive interpretation of a post we hadn’t intended.

A few kind words, an offer or two and just like that, things were back to normal.

Ever since, I’ve gotten into the habit of paying attention to the ways that brands respond to negative feedback. Some of my favorites are the big players. 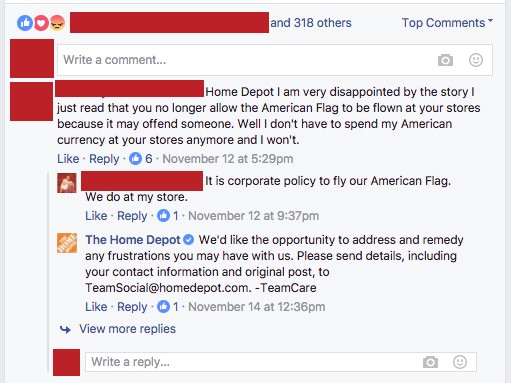 A Big Brand I have no real reason to pick on Home Depot, they just happen to be big enough (Facebook, 2mm Likes) to talk about, and when I had noticed that they had run afoul of a bit of fake news, I was interested.

One of the real challenges of working in social media marketing is that more often than not you end up in a situation where it’s late at night and you can’t get ahold of any of the stakeholders in your organization. It can be worse if someone has left a comment about something that doesn’t seem quite right outside of the normal hours, but the truth is these sorts of sudden off script moments present a real challenge for the modern marketing organization.

One of the real troubles with this is that all too often, you end up in the same unfortunate position that the fine folks on Home Depot’s social media response team found themselves in the encounter captured in the screenshot above.

All too often, we can find ourselves struggling to respond to something that can seem to well organized to be random. Maybe it’s a handful of users fired up about a flag story, maybe it’s a cross section of an audience offended about the way a message was presented.

Often this sort of backlash is the product of a brand receiving a measure of attention from a community or segment of the population that’s found something to object to.

It doesn’t really matter: when it happens, it can catch even the most disciplined of teams off guard.

It would be easy to write a post about how the team could have made a joke or leveraged the controversy to their advantage. The truth is, that no marketing team on the planet should be expected to catch every reference nor can it deploy a strategy to take advantage of every opportunity that presents itself.

Easier still would be to explore the ways in which potential for outrage should be examined in any pre-posting review process.

But neither of these points would address the underlying problem that causes so many front line marketing specialists panic.

And, under that line of reasoning the reaction from the Home Depot team might seem strange. I think there’s more to it than that.

The truth is that backlash like this can’t be messaged around.

It can’t be predicted.

It can’t be avoided.

When it comes to backlash like this, you really only have one option. Your response has to be accommodating.

You can’t always prepare your team to anticipate the sort of situation where this kind of reaction is necessary.

That doesn’t mean you’re out of options.

Instead, try and cultivate a principled driven customer success program. Establish a system to evaluate the significance of different reactions. Highlight the values you know you need your team to exemplify. Set priorities.

That’s what I like about the example above. You can clearly tell that even if the CsR didn’t have a clue how to respond to the flag based inquiry, they knew to communicate the value of empathy and to offer to move the conversation to a more private channel.

It won’t work every time and it certainly won’t win any awards for elegance, but what I learned this week was that the truth is this sort of consistent discipline can make a big difference when it comes to maintaining your community online.